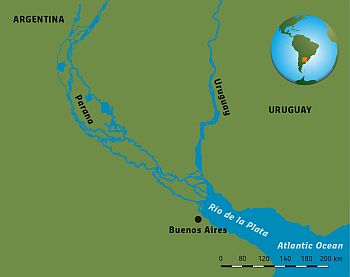 The Paraná Delta is a large and heterogeneous territory that can be considered an extreme case due to the dynamics that interact within this area. Nevertheless, many of the conflicts that can be found there replicate in other deltas around the world, which are subjected to pressures related to urban growth and climate change, within a context of uncertainty and unpredictability. Those pressures interact at multiple scales and temporalities, affecting the components of the system, as well as the relations between them and with the environment. This complexity reveals the need for the society (including governments, institutions, civil organisations, academia, among others) to enhance the adaptability of the delta system, to cope with changes without losing its substantial characteristics.
The dissertation (Verónica M.E. Zagare, 2018) is focused on the study of the complexity of self-organising processes that emerge in metropolitan areas located in (or near) delta territories, to link climate adaptation with urban development from an actor-oriented perspective. For that purpose, the thesis includes the design and implementation of a method of participatory design of spatial plans that is applied at the local level, to generate an impact at higher scales. The method designed in the research also includes the development of interactive scenarios in order to think about possible future events and reflect on the necessary policy and actions to make the system respond to changes in a more adaptive way. The scenarios, as well as all the indicators analysed along the process, are developed through participatory workshops, after an analysis of the actor-network of the area, and also of the local, provincial and national regulations.
>> Read more: thesis

Introduction to the Paraná Delta
This research focused on the wetland system of the Paraná Delta and the Río de la Plata estuary, through which drains the second most important watershed in South America (La Plata Basin). The wetlands of the Paraná Delta constitute a large and heterogeneous environment where the interaction between nature and occupation patterns generate different situations in its 320 km of extension. Along the coasts of the Paraná River, a network of cities with diverse scales of relevance and specialization is established, which determine the wealthiest and most populated economic corridor of the country, and which converge with the Mercosur's most important commercial route connecting Santiago de Chile (Chile) with San Pablo (Brazil) (Zagare & Manotas Romero, 2014).

In the Lower Delta, the conflicts between natural and urban development exacerbate, due to the proximity to the Metropolitan Region of Buenos Aires, the largest conurbation of the country, which population exceeds 12 million inhabitants. There, the municipalities of Tigre and San Fernando, suffer the pressures of land use changes and extreme climatic events. The municipality of Tigre, with around 380,700 inhabitants, is constituted by 40% of continental lands and 60% of islands, while the municipality of San Fernando, with 151,100 inhabitants, has only 3% of its continental land area, while the remaining 97% are islands (of which 93% -approximately 887 km2- has been declared as a Biosphere Reserve by UNESCO). Despite their spatial contiguity, the islands of both municipalities face opposite processes.

The different spatial situation of both municipalities is mainly related to contrasting goals regarding local policy. Since Argentina is a federal country, municipal governments have the responsibility of the urban planning of their territory, and must also coordinate actions and policies with higher leves: provincial and national. The Paraná Delta is under the jurisdiction of one Nation, three provinces, and nineteen municipalities.

Innovative planning methods for emerging metropolitan deltas in the context of climate change
The Paraná Delta, as other deltas in the world, presents a complex dynamic defined by the confluence of two open subsystems: the natural processes that characterises a deltaic environment and climate change; and the emerging metropolitan dynamics, both interacting under an atmosphere of uncertainty. These areas can be characterised as emerging metropolitan deltas, which were defined in this thesis as “complex adaptive systems where the dynamic confluence of deltaic and metropolitan subsystems takes place in constant transformation due to the emergence of self-organising processes”.
In order to reach a sustainable and adaptive territorial management, it is necessary to design and implement innovative planning methods addressing environmental and social dimensions, to stimulate adaptation and promote an increase in the resilience of the area as well as in the governance level. To this end, territorial management processes should be revised to focus on the participation of actors and reformulate institutional relationships. In the municipalities of the Lower Paraná Delta there is a desire to expand the participation process although it is at an early stage. In this sense, the present investigation had as objective the design and implementation of a strategy for the evaluation of climate change and territorial development through the creation of spaces for the collaboration of actors in the decision-making process.

A scenario-based method for participatory design of adaptive spatial plans
The method designed and implemented in the local context of the municipalities of Tigre and San Fernando, consisted of a series of stages with the participation of a scenario team (three members responsible for coordinating the activities), and a scenario panel (different stakeholders that were carefully selected through the analysis of the actor-network of the area). From the beginning, the stakeholders played a relevant role in the process, identifying indicators that will be relevant for the future of the area and defining possible path-dependencies of actions and consequences. Then, the scenario team quantified and mapped the indicators to developed base scenarios. The indicators and scenarios were organised following the Layer Approach (McHarg, 1969), to structure the information and the communication strategy. After that stage, the stakeholders were convened to a workshop where they used the base scenarios as a start point to co-create new ones. Thus, new interactive scenarios were discussed among all the participants to get to a final integrated scenario and a set of possible actions to implement to counteract adverse effects and promote positive externalities in the area.
This strategy allowed the generation of base knowledge on the area, through a platform of exchange between actors of the sciences and practices. Academia, government entities, producers, civil organisations and other actors actively participated in this generation of knowledge that served as support for the discussion about the future of the area and the proposal of actions to be followed to increase resilience, guaranteeing socioeconomic and territorial development. The co-creation of interactive maps allowed the actors to visualise and intervene in the territory, addressing land use changes, climate change, and legislation. This last aspect generated a positive effect on the actors since they visualised in the area the possible consequences of taking the practice of law to its limits in issues such as density and permits for land use change. Also, a collaborative environment was generated around the evaluation of the indicators for the area and the relations with the adjacent localities, raising the need to replicate the workshop in other municipalities.
Regarding methodological aspects, the research expanded the Layer Approach, which analyses the reality of the territory as an interaction of three layers: substratum (environment, or base layer), network (the physical infrastructure layer), and occupation layer (urban patterns), introducing a new layer: governance throughout the process. The use of this approach contributed not also to organise the data and structure the scenarios but also as a communication tool for reaching all the stakeholders regardless of their different backgrounds. 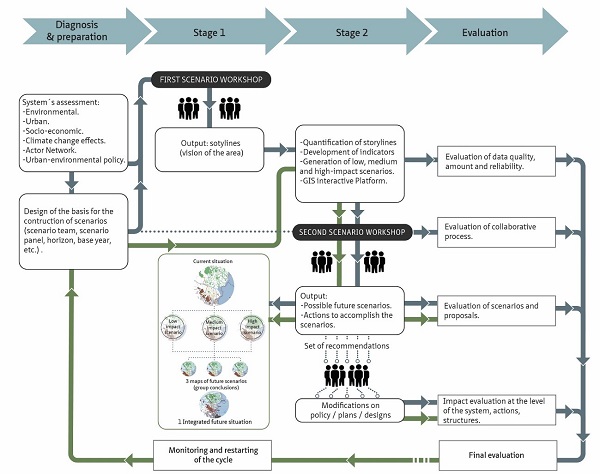 Seminar on the Paraná Delta
In the context of the thesis defence of Verónica Zagare, and the cooperation between the Dutch and Argentinean governments, a Seminar was held in Delft, organised by the Delta Urbanism Research Team, Department of Urbanism (TU Delft),  in collaboration with Delta Alliance and Deltares.
The Seminar, which was moderated by prof.dr.ir. Han Meyer, consisted of a presentation made by Verónica Zagare on the research, design and application of the participatory method, and a presentation on the cooperation between the Dutch and Argentinean governments made by Patricia Trambauer on behalf of Deltares. In the end, a discussion took place with the participants regarding the specificities of the Paraná Delta case and the generalities that could link this study with other deltas around the world.
>> Read more: seminar

(1) This article is based on the Doctoral Dissertation entitled “Towards a Method of Participatory Planning in an Emerging Metropolitan Delta in the Context of Climate Change. The Case of Lower Paraná Delta, Argentina”, developed by the author under the supervision of Prof.dr.ir. Han Meyer at the Department of Urbanism, TUDelft. The thesis can be downloaded from: https://repository.tudelft.nl/islandora/object/uuid:884bc071-43f5-49c2-8113-f90ae8a690fd/datastream/OBJ/download